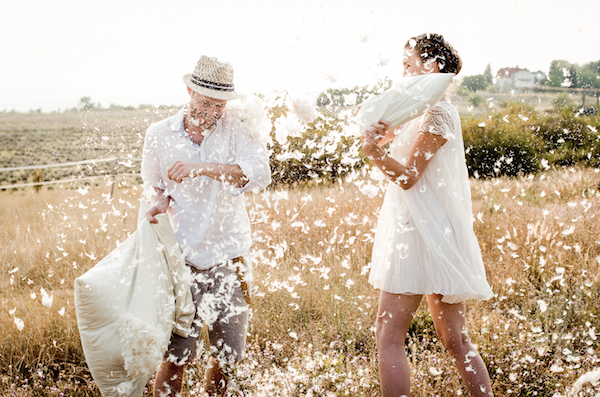 The Art of Photography: Spontaneous Photos

The art of intuitive or spontaneous photos is something modern artists often underestimate. The photo is one of those art forms, in which the result (i.e. photos) may be achieved either by initial preparation, long thinking over, or quite spontaneously. Not every sculptor picks up a piece of clay, without knowing, what he wants to make of it, at least roughly. Just like an artist is unlikely to easily drive something directly to the canvas with a brush until he’s got anything similar to the picture. But in photography both methods of creation works are possible.

Every fashion photographer is obsessed with photo staging at the studio thinking that situation modeling may better reveal his or her artistic talent. In fact, the true photographer is the one that opens up the beauty within people with nothing but a spontaneous momentum or an intuitive shot. Despite the fact that there are two main types of work approach the photographers may use, few can distinguish them in detail. Wanna learn? Let’s go.

For making such spontaneous photos, a certain foreshortening is used, particular photographic lens, lightening, actors, filters and even more. Staged picture or artistic photo, implies the idea and the plan of its realization. Usually, it’s time-consuming process. This is the basis of any staged photo. It will differ from all others in that it does not imply an objective reflection of reality, but rather records the pictures, specially selected and man-made or creates the photography that reflects a certain artistic idea, etc.

Look through the old photo albums at home. Wedding photos, pictures of other celebrations, staged photographs of school boys and girls, cos playing, staged dining room photos, any shots, where models somehow pose can be called amateur funny staged photos. In ordinary life, the genre is used for shooting ceremonies, commemorative events and carries a certain information about the event, the characters and, many of these images have a “memory” label, as a rule.

But there is also a professionally staged photography. It’s about the professional photographers and their studios, where anyone can order a special series of shots united by a particular chosen topic. The photographers can easily be engaged in staged filming with non-profit experimental purposes, to improve their own skills, practice proofing or produce real works of art for a portfolio or worthy exhibitions, etc.

This type of work sure is more likely to require different technical components. Camera, lighting, the final image processing, materialization focused elements: objects, actors, makeup, natural elements, and, directly, the artistic idea. It’s the result set of images and technical concepts that require a fairly more serious skill and knowledge to work with photos and, of course, the artistic vision and imagination of the photographer, which, however, does not interfere with the amateur photographers opportunities to try their own hand at staging pictures. In fact, it is available for all, but the basic condition for them is to have imagination and creative thinking.

And now let’s move to the second type of photographs.

Occasional, spontaneous photos are more vivid and filled with dynamics. They are more valuable to the average customers and rather doubtful among the professional photographers. Unlike staged bedroom photos, spontaneous art is more interesting for the viewer, rather than the professional photographer. And for both due to its imperfection. There also are no restrictions on the degree of professionalism, availability of expensive lens and other props, etc. And, again, there is a mandatory condition for having imagination and the artistic vision with the author. Who said amateurs give way to professionals? If you ask: what’s the difference, then? We’ll answer: the difference is rather in arts contents, but not the form.

The truth is that there is no artificial, as if deliberately elaborated plot, and a planned script of shooting spontaneous photos. Secondly, these pictures are too instant, almost ephemeral to be retaken. Of course, they cannot possibly reflect the characteristics of human nature, its emotional side or a state of mind more finely and accurately, etc., but it’s still a true photography. The most unexpectedly candid and the one and only genre. This genre involves hunting for the real picture of everyday life, live emotions, people fascinated by feelings or by any action of other individuals, unsuspecting that they are being shot; animals or anything else from either animate or inanimate nature.

Family albums my be done without leaving the house, shooting the real-life moments of the family, pets, trying to catch a scene in which the character has not had time to realize that is being photographed and was enthusiastically engaged in something else. For more serious works in the same way, people may go out into the streets, and in any weather, just in the mood and without any particular thought, walk up to the city, and notice a lot of interesting pictures and amusing situations to be pictured.

This is the best photography school for inborn and talented photographers. Only a sharp eye of a real artist will be able to spot and photograph a smile, shining with happiness, in the crowd even in bad weather. That touching moment is the key to success because the person smiling and passing by has no idea that he or she is being pictured. Not even the concept of having being watched! These are simple examples of what spontaneous shots can be. Everyone with experience and skills of classic photography can achieve amazing results in this genre of spontaneous photos too!